X-ray absorption fine structure (XAFS) is a specific structure observed in X-ray absorption spectroscopy. On a synchrotron X-ray source this can be coupled with information on the metal coordination and oxidation state in the material (e.g

Catalyst) providing a powerful understanding of what is occurring in real reactions. The DRIFTS spectrometer is a powerful tool for studying inset chemical reactions and when coupled with XAFS can provide insight into reaction mechanisms and active site behavior and characteristics.

The spectrometer can be used for the study of reactions over metal and metal oxide surfaces under operando (real) conditions to enhance our understand of how catalysis activate/deactivate, and the nature and changes in the active site of catalysis as reactions progress. This is of interest to anyone studying reactions over surfaces in chemistry, materials science and catalysis.

The XAFS DRIFTS facility provides the UK Catalysis Hub and its network with a unique cutting edge resource for the investigation and understanding of real catalytic systems: what the active species is, how it is activate and importantly deactivates so that we can develop our knowledge of catalytic mechanisms and develop new catalysts with increased activity and productively, to promote new and more efficient reactions of relevance to global challenges and industrial processes.

Catalysis Hub network and academics in collaboration with Hub researchers.

Is there preferential access given to a particular type of researcher? E.g. Based on institution, field of research

Members of the UK catalysis hub ( industrial or academic)

Any SLAs or standards (eg ISO, ..) associated with the facility?

Does it require an on-site visit to use the facility/equipment?

Yes/No. The facility is situated at the Harwell campus, however regular experiments can be taken to beamlines (e.g diamond light source, ESRF etc).

Are there costs associated/fees? Please explain.

Free at the point of use however costs (travel, substance, consumables, chemicals) are incurred by collaborators and other costs may be incurred during beam times at synchrotrons. Users are expected to provide their own consumables and chemicals.

Can it be bought as a service with access to a team of experts?

No, however the hub is pleased to collaborate. An understanding of the techniques used (IR and XAS would be needed to understand the data produced). Users would be expected to get training and learn how to use the machine or collaborate scientifically with researchers as part of he UK catalysis Hub.

One of the remits of the UK Catalysis Hub is to maximise the opportunity presented by having a physical research base on the RAL campus. The ability to develop bespoke sample environments, in conjunction with Diamond, that the entirety of the UK Catalysis Hub have access to is a unique situation and strategic advantage for UK catalytic science.

Where is it located? 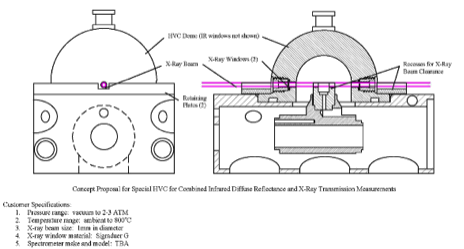 Schematic of the cell showing the beam and IR

“The XAFS DRIFTS set up is a popular instrument in our laboratory used by many researchers for various applications. This combined technique allows real time analysis of the changes taking place on a catalyst surface and oxidation state changes of the metals, allowing a deeper understanding of reaction pathways crucial to the chemical industry”